This morning the CEO of Uber, Dara Khrosrowshahi, visited the MaRS Discovery District, which is also home to the Vector Institute, on his inaugural visit to Canada. Dara announced the company’s plan to invest $200 million, and employ more than 500 people, over the next five years in a new software engineering hub in Toronto.

This announcement comes on the heels of several major AI-related expansions announced in Toronto this year and is the fourth this week.

The message is clear; global companies continue to recognize Toronto and Canada as world-renowned centers for artificial intelligence research and development. Vector is proud to contribute to the rapidly growing AI ecosystem by creating a place for faculty, students and companies of all sizes to collaborate and share ideas. 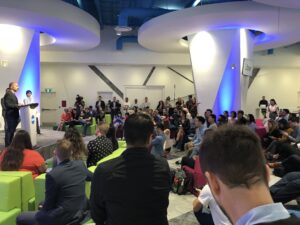