Vector research blogs offer short, non-technical explanations of the ground-breaking research happening within the Vector research community. They are written by Vector Institute students, post-docs and faculty members, and affiliates.

With the rise of powerful and flexible function approximation, model-based reinforcement learning (MBRL) has gained a lot of traction in recent years. The core idea of MBRL is intuitive: (a) use the data obtained by online interaction of an agent with its environment, (b) build a surrogate model of this environment, and (c) use this model to improve the agent’s planning capabilities. 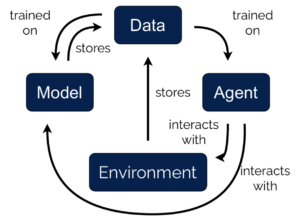 Caption: A sketch of the DYNA algorithm. The model is used to generate additional data for the RL agent training.

While intuitive, this approach can suffer when we obtain multimodal, high resolution sensory information. In these cases, the agent may be observing more of the world than is necessary to complete its task; creating a predictive model of the full environment may actually be harder than the task at hand itself.

In most MBRL approaches, the environment model is obtained from the maximum likelihood objective, often via a reconstruction loss where the model tries to predict the next observation an agent encounters based on its previous observations and actions. However, if the observation contains many superfluous dimensions, the MLE objective is ineffective, as much of the model capacity is spent on approximating the full complexity of the observation space.

When is a model mismatched?

Caption: For a car driving task, it is important to differentiate important from unimportant environment features. While it is very important to predict the likelihood of pedestrians entering the road, the clouds in the sky are just distractions.

This phenomenon has been termed the “objective mismatch:” the model does not know anything about the task the agent is trying to solve and no information from the task is fed back to the model learning. The objectives of the agent (“obtaining high reward”) and the model (“achieving low reconstruction error”) do not necessarily align. When trying to solve this problem, we quickly run into a catch-22: one of the core assumptions underlying decision making is that we do not know how to solve the task, otherwise we would not be doing model learning in the first place. We need an accurate model of the environment before we can solve the task, so how can we feed task information back to the model before solving it? 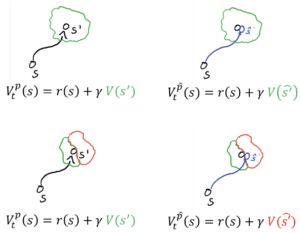 Does this solve the objective mismatch problem?

Although the theoretical underpinnings of the VAML approach are rigorous, when naively applying the algorithm in practice, two problems quickly become apparent.

(1) In many RL environments, we cannot assume that the state space is fully explored in early iterations, which means that there are many possible states in which we do not have data to learn a value function. However, a function approximator will still assign a value to these points, interpolating from previously seen points in the training set, often resulting in nonsensical values. When the model predicts that a next state is in an unexplored region of the state space, the VAML loss will not penalize it for predicting a completely wrong state if the value functions align. In some cases it can even drive the prediction further into the unexplored regions, simply because it only seeks to find a local optimum of the value function prediction. When the value function is updated, the predictions in the regions of the state space that are not covered by data often change rapidly, which suddenly cause very large value function prediction errors when using model data.

(2) The second problem is the smoothness of the value function and resulting VAML loss. In many common applications, the value function is not convex or smooth, exhibiting plateaus and ridges that make the VAML loss difficult to optimize. In the image below we show the value function of the Pendulum environment. The non-smooth nature of the function shows in the two sharp ridges. When non-smooth value functions are coupled with out-of-distribution value estimates (problem #1), this can result in massive gradient norms and subsequent gradient descent procedure using this estimate can diverge rapidly.

Caption: A visual comparison of all the discussed value functions.

To solve the model mismatch problem without introducing new optimization challenges, we argue that a good model loss should have three properties:

We call the loss function the Value-GRadient-weighted Model loss (VaGraM).

Does it actually help in practice?

The theory underlying VaGraM and VAML tells us that a value-aligned loss function should matter most in scenarios where the model is insufficient to capture the full complexity of the environment, or in cases where there are irrelevant dimensions in the state space for the control task. To verify that VaGraM actually increases the performance of a state-of-the-art model based RL algorithm, we conducted two main experiments:

(a) Does VaGraM help when the model doesn’t fit?

We took the popular DM control environment Hopper and Model-based Policy Optimization (MBPO). We replaced the MLE loss in MBPO by VaGraM and gradually decreased the model size to limit its capacity. The performance of the maximum likelihood solution quickly deteriorated as the model grew smaller, while the performance of the VaGraM augmented version stayed stable.

(b) Does VaGraM help when the model is hard to fit due to distracting observations?

We appended superfluous dimensions to the state space following an independent non-linear dynamical system. This proved to be a very challenging environment, and both MBPO and VaGraM dropped in performance quickly with an increasing number of distracting dimensions. Nonetheless, VaGraM managed to stabilize the Hopper and achieve some forward motion when faced with 15 distracting dimensions, while the MLE solution collapsed to the performance of a random policy.

In further experiments we found that VaGraM is able to perform on par with MBPO in all DM control environments, and even outperforms it on the Ant benchmark. We hypothesize that the Ant state space is not perfectly tuned for the control problem, which shows that task-aware losses can achieve better performance even in environments where we previously did not expect the state and observation space to contain superfluous information.

If you want to use and expand VaGraM, the implementation of the core loss function is surprisingly easy and can be included into most deep learning frameworks with only one additional backpropagation pass through the value function network.

Here is the loss function code using the jax library: