Shai Ben-David earned his PhD in mathematics from the Hebrew University in Jerusalem and has been a professor of computer science at the Technion (Israel Institute of Technology).  Over the years, he has held visiting faculty positions at the Australian National University, Cornell University, ETH Zurich, TTI Chicago and the Simons institute at Berkeley. Since 2004 Shai is a professor at the David Cheriton school of computer science at University of Waterloo. He has also been an area chair and senior program committee member for the International Conference on Machine Learning (ICML) and the Neural Information Processing Systems Conference (NIPS).

Shai’s research interests span a range of topics in computer science theory including logic, theory of distributed computation and complexity theory. In recent years his focus turned to machine learning theory. Among his notable contribution in that field are pioneering steps in the analysis of domain adaptation, learnability of real valued functions, and change detection in streaming data.

In the domain of unsupervised learning Shai has made fundamental contributions to the theory of clustering and developing tools for guiding users in picking algorithms to match their domain needs. He has also published seminal works on average case complexity, competitive analysis and alternatives to worst-case complexity. 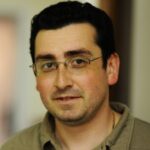